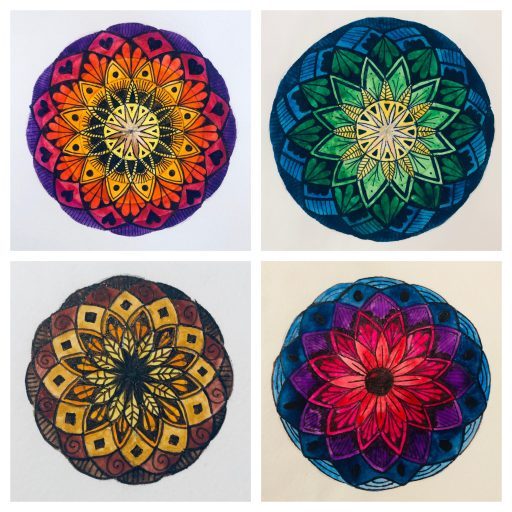 When I am following a SOW, the percentage topic usually follows fractions and decimals but this year I have been following the SOW for year 10 and it’s placed in the Ratio and Proportion unit which makes a lot of sense. Obviously topics interconnect and it’s placing could easily be in more than one location but I have enjoyed teaching it in this unit. After spending weeks looking at ratio tables it makes it easier to look at questions like;

Students are able to think about finding 1% or they can simply see the connection that the amount is 3 times bigger than the percentage. Which is the same as finding 1% but is a much nicer way of seeing this particular question. I used these percentage spiders (taken from Don Steward site) in the lesson and students very quickly used proportional reasoning to find all the missing percentages. One student commented on the fact you could find all percentages from just 1% 10% and 50% and we all agreed these were very easy to find even with ‘tricky’ numbers. 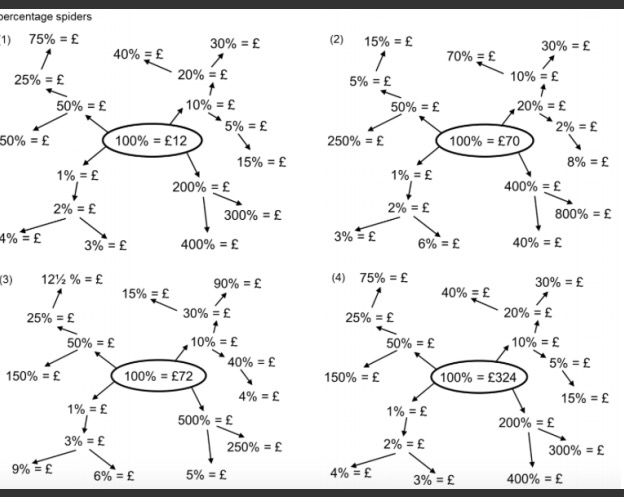 The next step from this was to try and find percentages that looked tricky but once they were broken up were easy to find. I was surprised by how many in my set 3 who worked through the table and were fine with 10%, 5% and 1% but then struggled with 6% and 111%. Even though the top half of the table had percentages useful to calculate 6% and 111% we did spend a great deal of time before they attempted this table looking at how we could find 9% or 11% or 15% or any other percentage they deemed ‘tricky’ 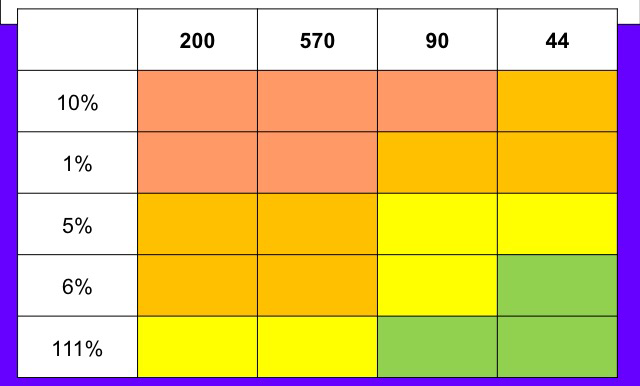 The colours used on the table were just to highlight the percentages that i thought wouldn’t cause a problem (red) and then green for the more challenging ones.

At the end of this lesson we looked at the following problem;

I only wrote two in the hope that students (after finding that both were equal in each set) would try a few of their own to see if they were also equal.

UPDATE! After tweeting this link i received the following reply 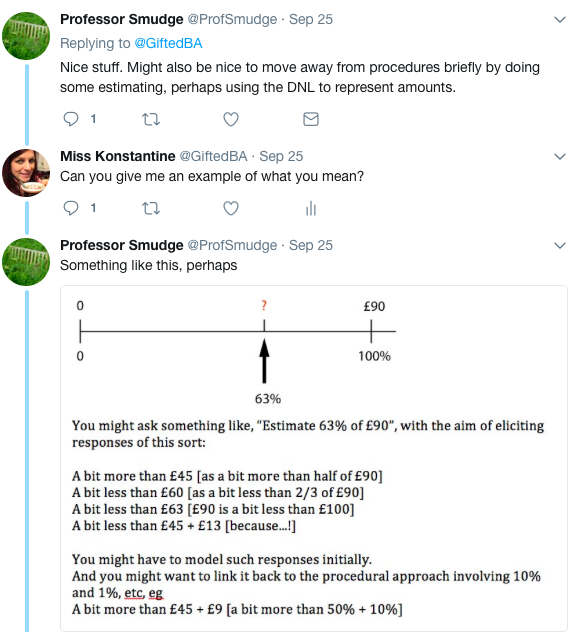 The next lesson, I asked the class to estimate 63% of £90. I was pleased that they didn’t just try and calculate 63% but actually tried to estimate the answer. Some just gave numbers that sounded appropriate but when questioned they said they had just guessed at a number between 0 and £90. I asked of they could narrow their ‘guesses’ at all and one said it has to be more than £45 as ‘£45 is halfway’ Then someone suggested £54 as 10% was £9 and so 60% was 9 x 6. When i showed each of the estimations prof Smudge suggested they were fine explaining the first two but when it came to the second two estimations they started doing some strange things.

I decided that in the next lesson i’d like to tackle this misconception and so i made the following starter to use.

Students quickly realised with this problem that Ali either; subtracted 11% from 89% and probably subtracted £11 from £70 or he subtracted £30 from 89 as there was a 30% difference between 70 and 100%. The fact both ways resulted in £59 confirmed the thinking. I gave students time to add in any other marks they wanted on the line. Some added in multiples of 10% and some used 1%. 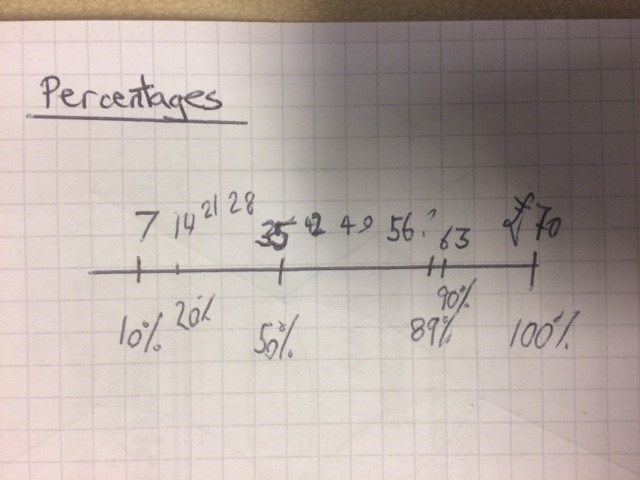 One student did make a comment that if 10% is £7 then 1% cant be £4 and that is how much is needed to get from £63 to £59. The rest of the class took a while to notice this and fully understand it. It made me realise that students didn’t always realise that if 4% is £3 then 8% is £6 so maybe they needed to view them in a ratio table. Likewise if 10% is £30 then 7% is £21 because the amount is 3 times the percentage so again a ratio table would help. I made the following starter for the next lesson. 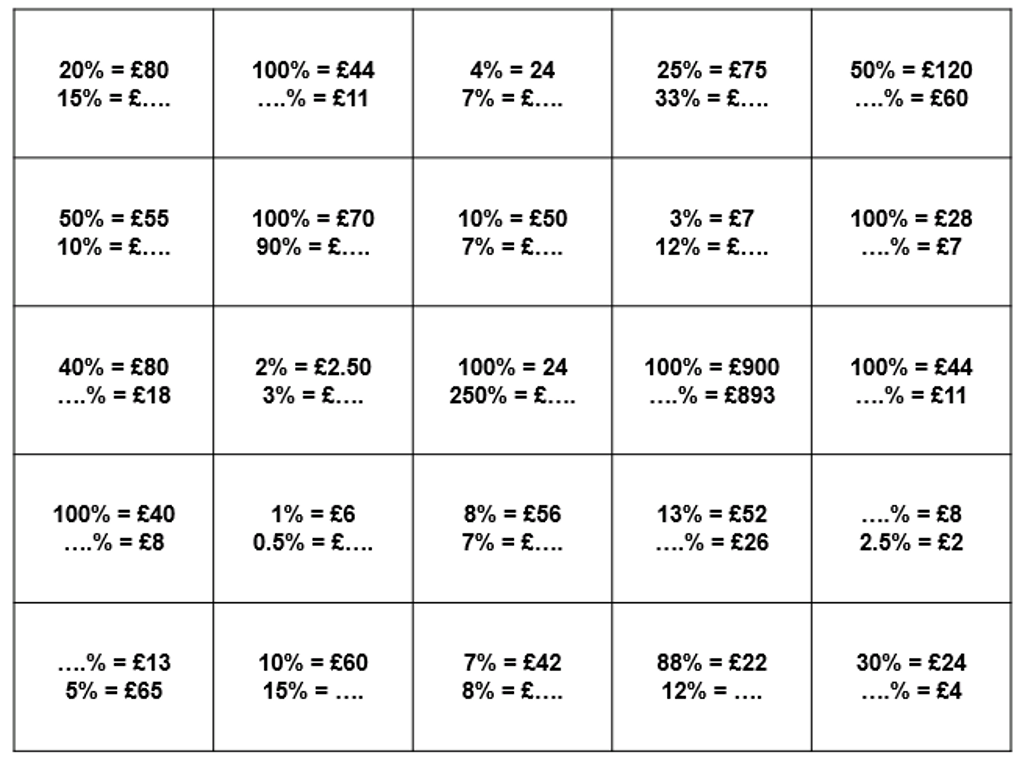 i was pleased to see lots of methods being used and sometimes two methods to check answers or methods changing to suit the question. 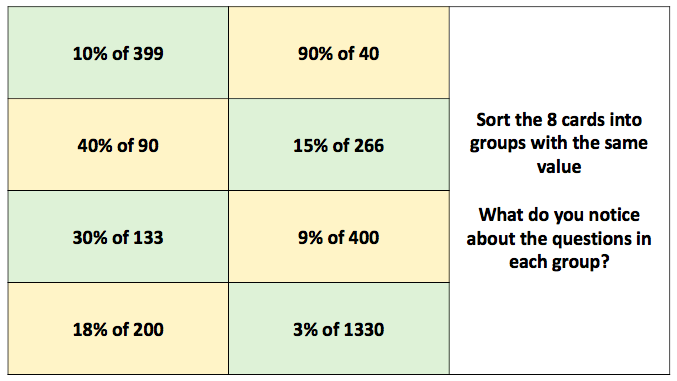 I am trying this with some of my classes. I’m hoping it will provoke some discussions on percentages and MR

Here is another Question i will try tomorrow- very challenging but i want students to see that a 1% drop can’t be found by doing 10% decrease followed by a 9% increase. 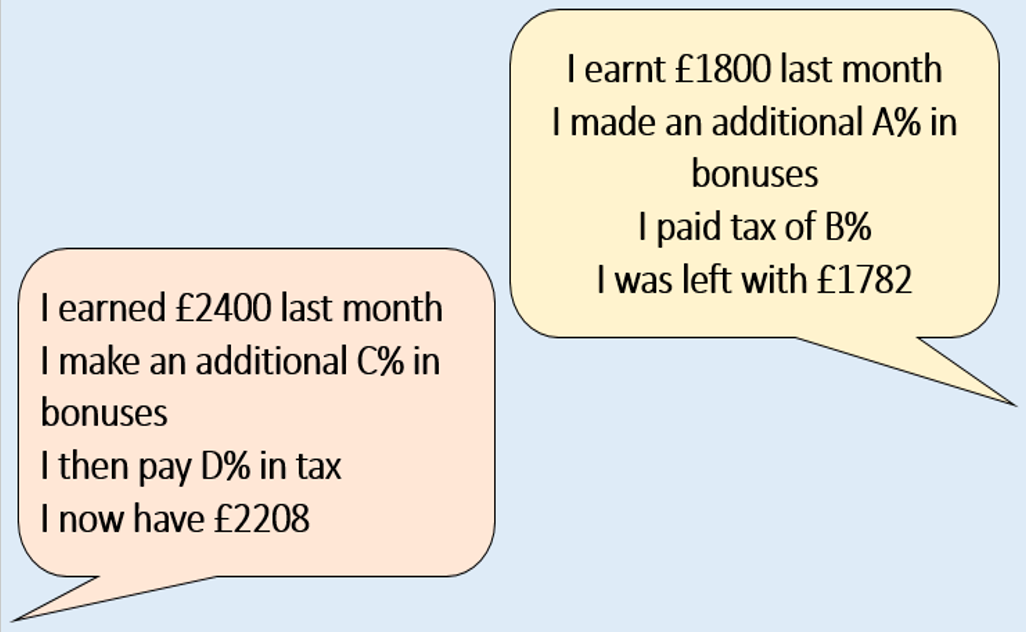 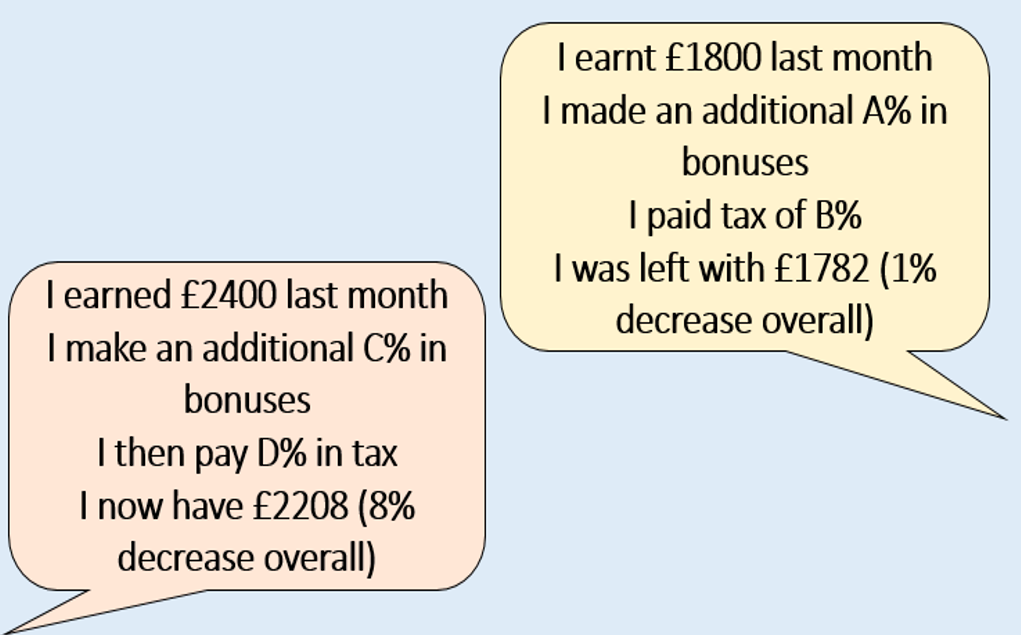 I have been wondering about Percentages and how I use values to help me ‘see’ the answer. I also tried sketching to get an idea of the answer. 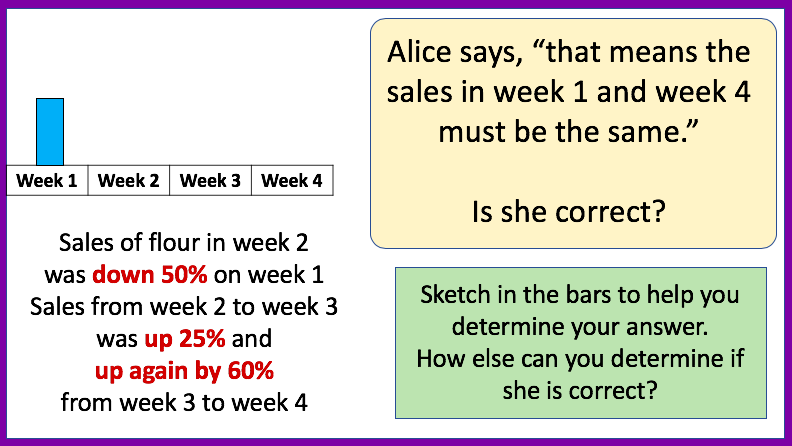 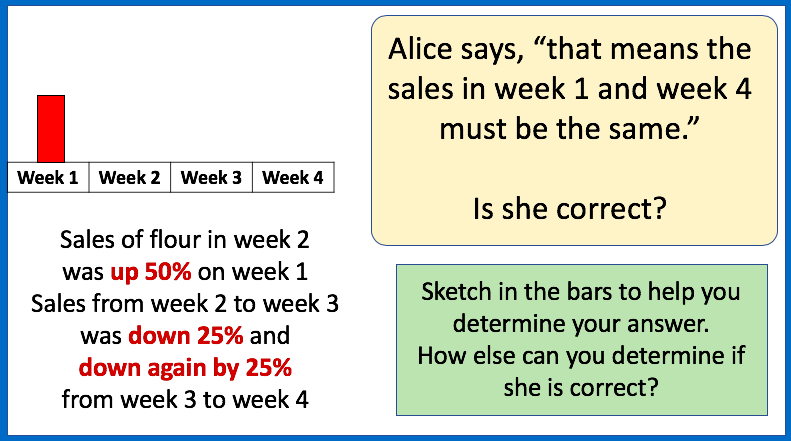