Looking forward to September and I have seen that I will be teaching Circle Theorems in the first term. Its not a topic I’ve taught in a while so I wanted to have a look at some issues that I think may arise (if memory serves me well, students sometimes incorrectly identified some theorems because they ‘looked’ similar to others) so I wanted to create a few resources, that I could use if needed, that hopefully highlighted these errors that students made.

I decided I’d start with finding missing angles in triangles where two sides are the radii of the circle. We’ve been looking at area of sectors and circles in the previous lesson so they have been exposed to some of the terminology needed. Then after looking at angles in a triangle I would like to look at angles subtended from an arc from the centre… then work my way through angle subtended from an arc at the circumference… and then angles in the same segment. This will be plenty for one lesson and all are linked. The second lesson I’d look at a few more. I want to use questions to build up the ideas after we discuss them and then spend lessons looking at more complex problems. 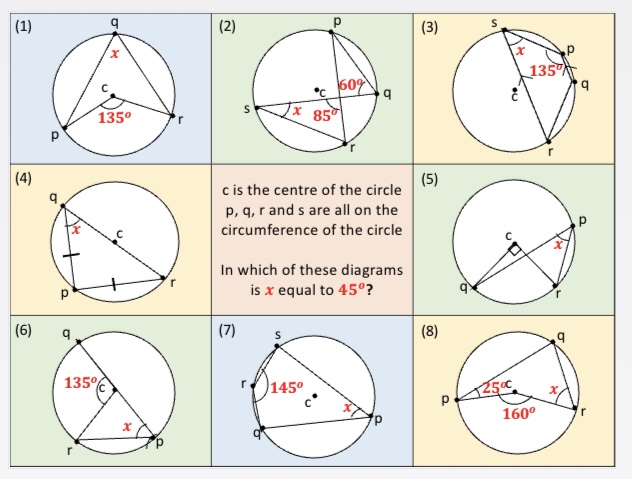 A simple 10 question build up of some of the circle theorems. Students liked using this as a practice starter.